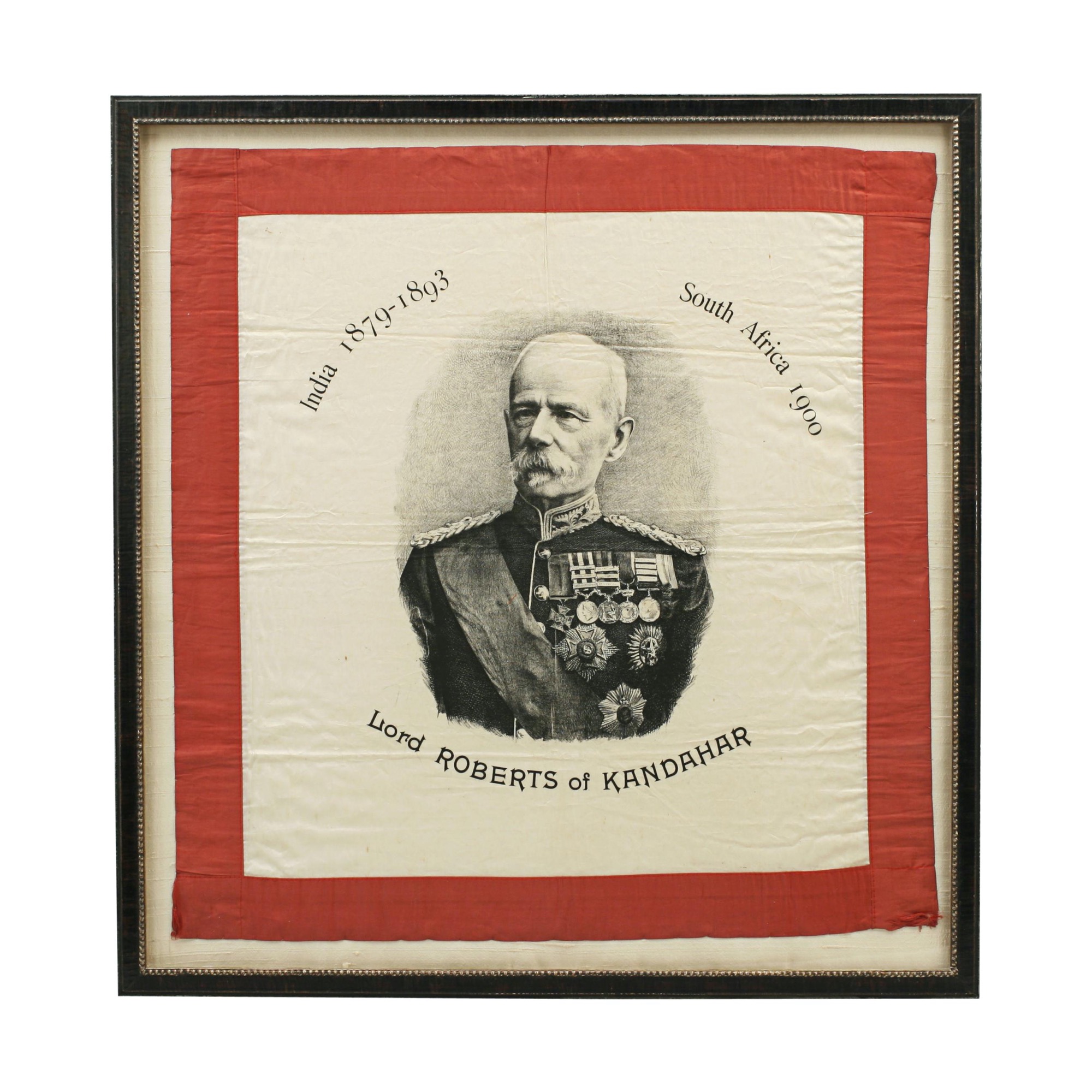 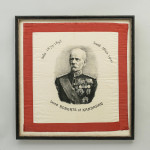 Lord Roberts of Khandahar Silk Handkerchief.
This wonderful souvenir handkerchief has been newly framed in a shadow box frame and is mounted onto a linen background. The handkerchief is printed with an image of Lord Roberts of Kandahar in his military regalia with the words 'India 1879 - 1893, South Africa 1900, Lord Roberts of Khandahar' around the image. Kandahar and skiing are synonymous with each other after Lord Roberts lent his name to the world's very first downhill ski race in Montana-sur-Sierre, Switzerland. The winner was awarded the trophy known as the 'Roberts of Kandahar Challenge Cup' which is used to this day for the premier of world downhill racing. In January, 1924, a group of British alpine ski pioneers decided to form a ski club at Muren, Switzerland, 'The Kandahar Ski Club'.

(source kandaharlodge.com)
To skiers and non-skiers alike, the name Kandahar generally is a puzzle and
rightfully deserves an explanation. First of all, Kandahar (which is a corruption of Alexandria) is the name of a town in Afghanistan actually founded by Alexander the Great during his monumental march Eastward to India and beyond.
Now, the tenuous link between the town of Kandahar and skiing is provided centuries later by British General Frederick Sleigh Roberts who, in August,1880, marched 10,000 men from Kabul to Kandahar, a distance of 313 miles, in 22 days to relieve the siege of a British Garrison stationed there. A grateful British government chose to knight him for this effort in 1882, and, in keeping with custom, he chose the name of one of his campaigns. Thus, the general became the first Lord Roberts of Kandahar.

Lord Roberts became vice-president of the Public Schools Alpine Sports Club in 1903 and eight years later, on January 11, 1911, a group of Englishmen held the world's very first downhill ski race in Montana-sur-Sierre, Switzerland, and Lord Roberts lent his name to the ski trophy awarded to the winner. This trophy was known as the Roberts of Kandahar Challenge Cup and is used to this day for the premier of world downhill racing.
Finally, in January, 1924, a group of British alpine ski pioneers decided to form a ski club at Muren, Switzerland, and for want of a better name decided to simply take the name Kandahar and use a block 'K' for a patch, thus starting what is undoubtedly the most famous ski club in the world. The Kandahar Ski Club was then instrumental in organizing the first international ski meet ever to be decided on the combined result of both downhill and slalom races. From that day forward a ski race meet was known simply as a Kandahar!
The driving force behind the Kandahar Ski Club was Sir Arnold Lunn, the man who invented and named the slalom ski race. Strangely enough, Sir Arnold always regretted his attaching the old Norwegian name slalom to his invention, recognizing that the German world torlauf ( gate race) would have been far more appropriate.
On March 3 and 4, 1928, Sir Arnold and his friend Hannes Schneider inaugurated and supervised the first Arlberg-Kandahar race in St. Anton, Austria, a full two years before the FIS recognized downhill and slalom racing and three years before the first World Championships in the Alpine Combined.

Very good, fragile, so newly framed to preserve it.