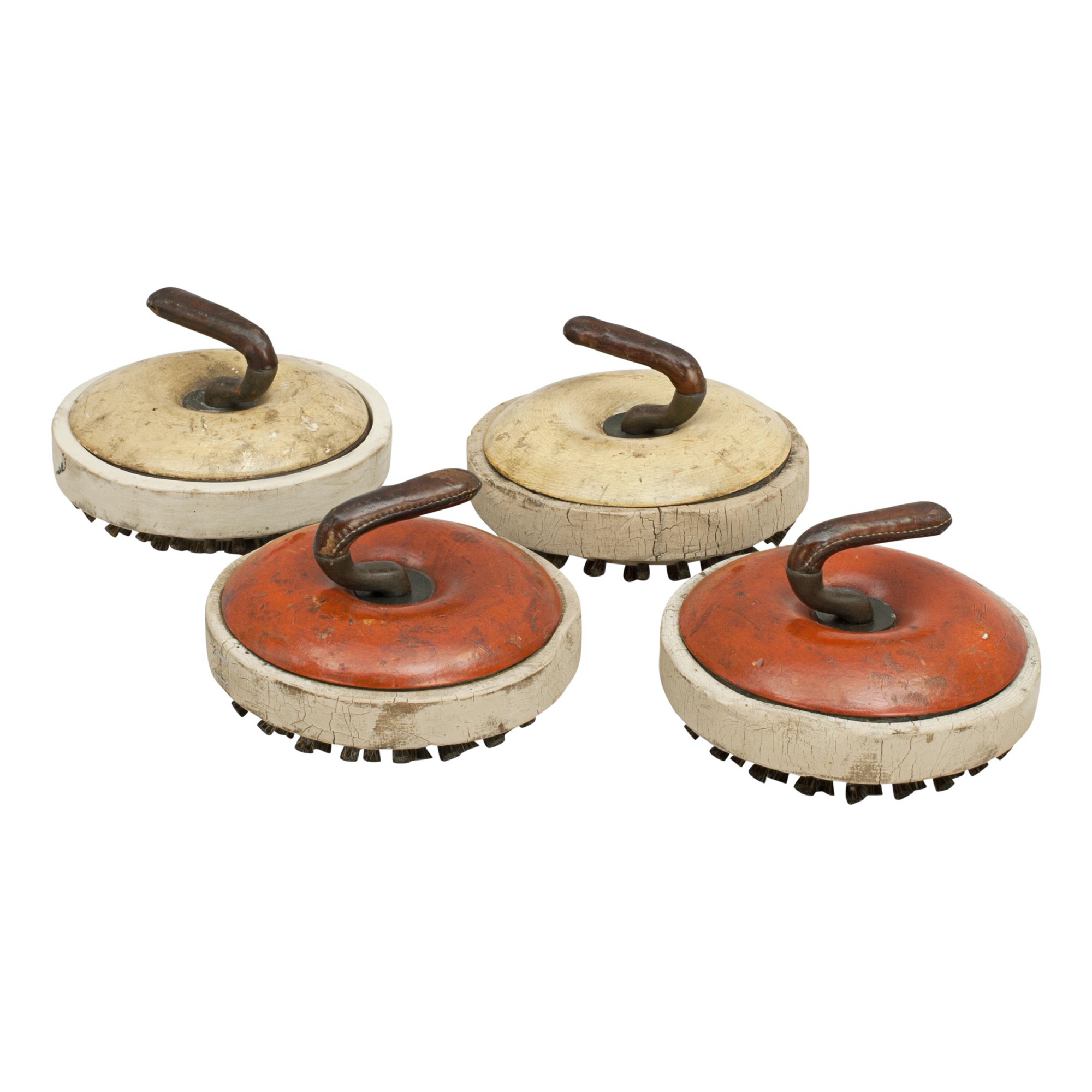 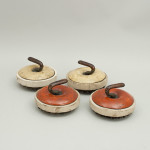 Set Of Wooden Indoor or Ships Deck Curling Stones.
Four rare and unusual miniature wooden curling 'stones'. The 'stones' are made of two halves of wood that encase a ring of cast iron, this gives weight to the stone. Each curling stone is fitted with a metal handle covered in leather (this holds the two wooden halves together), the underside (running surface) is with tufts of bristles and a buffer ring of white india-rubber is all around the equator of the stone. These were made for playing curling indoors on a polished surface or possibly on a ships deck. A patent for this style of stone was given in 1877, there is an image taken from a book which shows a diagram of the patent wooden curling stone.
We do have two more sets of four stones available at the same price.

The diagram (Fig. 56) and following text taken from CURLING: an illustrated history by David B Smith.

The curling season in Scotland was so short that fertile minds were constantly at work to devise methods of extending it. The lead given by the Earl of Mansfield in displaying the game to Queen Victoria on a polished wooden floor was not taken up for many years, but in the closing years of the nineteenth century various inventors obtained patents for substitutes for curling stones. The invention which obviously drew inspiration from the Earl of Mansfield's example was patented in 1877 and consisted of a weighted wooden curling 'stone'. The running surface, designed to be used on a polished wooden floor, was covered with tufts of bristles, something like an artificial ski-slope in reverse. The patent No. 1443 of 1877 is worth quoting in full:

SPECIFICATION in pursuance of the conditions of the Letters Patent filed by the said Robert Foulis in the Great Seal Patent Office on the 12th October 1877.

ROBERT FOULIS, of Cairnie Lodge, Fifeshire, Scotland. 'IMPROVEMENTS IN APPARATUS TO BE USED IN PLAYING GAMES SIMILAR TO THE GAME NOW KNOWN AS "CURLING".'
This Invention has for its object improvements in apparatus to be used in playing games similar to the game now known as 'curling'.
The game of curling is at present played on a surface of natural ice with weights, or as they are called 'Stones', which are slidden along the ice towards a point marked upon the surface. In this form the game can only be played when a frozen surface is obtainable.
In order to admit of a similar game being played in a room or other place having a smooth floor, I spread upon the floor a fabric similar to oilcloth, but somewhat lighter, and having a smooth face.
The fabric known as 'marble baize' is that which I employ, but it requires preparation to render it suitable for use, and this preparation consists in rubbing the surface with a composition of wax and turpentine.
Marble baize is especially convenient for use in rooms, but for larger sizes of the game, other smooth surfaces as wood and metal may be employed, but whatever material is employed, the surface is prepared with beeswax dissolved or rendered semi-solid by admixture with turpentine.
On this prepared surface the peculiar 'stones' which I employ slide much as do the ordinary curling stones on a surface of ice.
A special peculiarity of my curling stones, one of which is represented in the Drawing annexed, is that the bottom or frictional face of the stone is composed of short bristles set as in a brush, so that the stone stands upon the ends of the bristles.
I form the body of the stone of wood in two parts, an upper and a lower. These parts shut together boxwise, and between them I arrange a metal disc of a size to give requisite weight to the stone.
The stone is provided with a metal handle covered so that it may not injure the surface, if from unskilful use the stone should be overturned.
The stone is also provided with a buffer ring of India-rubber all around it, so that when in the course of play one stone comes into contact with another, the elasticity of the india-rubber may prevent shock and facilitate the transfer of motion from stone to stone.
The surface is marked with concentric circles as when the game is played upon ice.