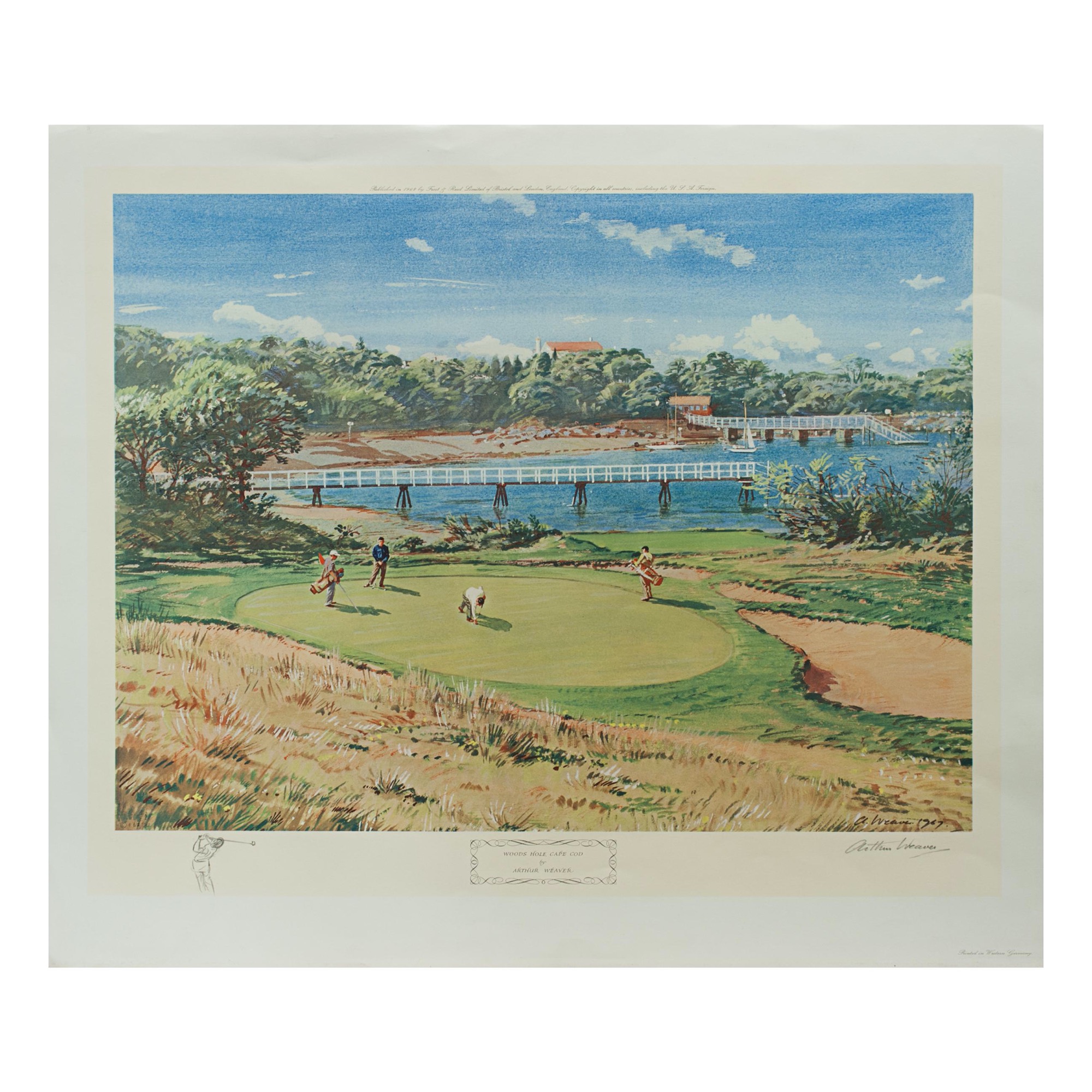 Golf Print By Arthur Weaver.
Colourful golf print 'Woods Hole, Cape Cod' by Arthur Weaver, published 1968 by Frost & Reed Limited of Bristol and London. The print is signed in pencil by the artist with hand drawn remarque of golfer in follow through position.

taken from www.woodsholegolfclub.com:-
Our first review came not long after our founding by our still active local newspaper…

"Situated on the very top of the highest point of land in the locality is the cozy clubhouse of the Woods Hole Golf Club, where, no matter from which direction the wind may blow, a cooling breeze is sure to sweep across the verandah, adding much to the pleasure of watching the players go over the course."
Falmouth Enterprise, August 12, 1899.

Late in the 19th Century, a group of Falmouth summer residents met in a Boston law office and set out the Charter for what would become a long-lived and much-loved golfing club. Only one other private golf club on the Cape can boast an earlier pedigree, and that's Barnstable's Cummaquid Golf Club, founded in 1895.

By 1919, Woods Hole Golf Club had been renovated and expanded to 18 holes. Before that season had barely started, news media was reporting on the new course layout. A May 24, 1919 Boston Transcript review noted:

"The bunkers are filled with the finest sand anywhere…that light, fine sand which makes it well-neigh impossible to chip a ball out with a light, clean stroke or to get much distance, but the kind from which the ball will always emerge on a well-played shot, taking plenty of sand."

"The course is at the edge of Buzzards Bay, with one of the greens located only a few yards from a beach of smooth white sand which fairly entices the golfer to give up his golf for a swim."

The favorable press continued. Massachusetts native son and Champion of the 1913 U.S. Open, Francis Ouimet played the inaugural Woods Hole Golf Club round on the new 1919 course, carding a score of 72. All in all, a beginning that promised well for this classic Cape Cod golf course