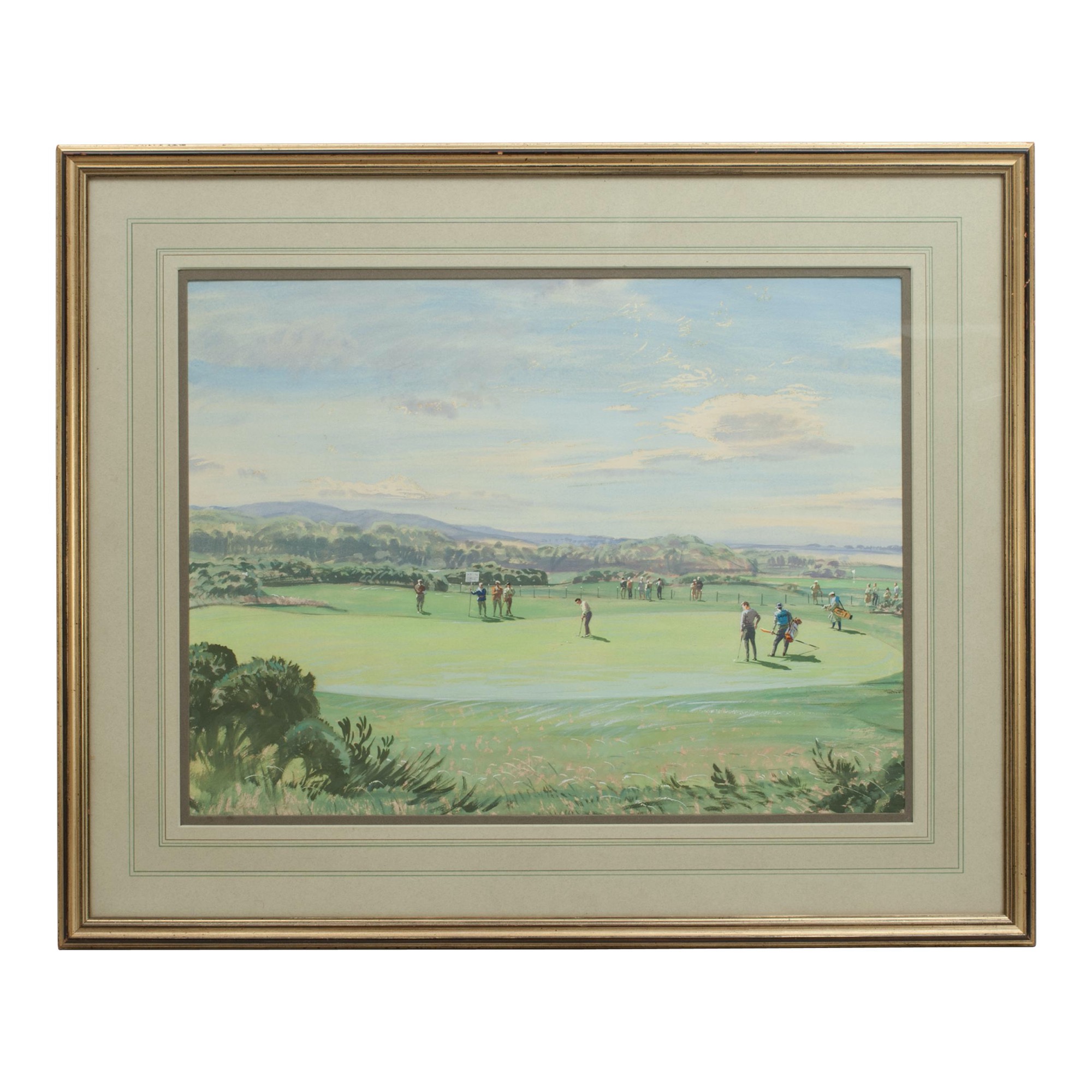 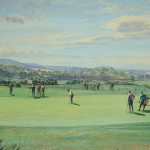 1967 Alcan Golfer of the Year Championship By Arthur Weaver.
An original golf watercolour and gouache* of the 6th green at St Andrews by Arthur Weaver. The picture depicting Gay Brewer putting on the 6th green at St Andrews in a playoff against Bill Casper in the 1967 Alcan Tournament. Gay Brewer beat Bill Casper by four strokes in a playoff to earn the biggest jackpot ever given to a tournament winner at that time. The last 7 images show the picture out of the frame. Clearly visible (hidden under the mount) written in pencil 'Brewer putting on the 6th green in the play off with Casper. The Alcan Tournament, St Andrews. 1967'.

The Alcan Golfer of the Year Championship, also known as the Alcan Open, was an international golf tournament played from 1967 to 1970. It was sponsored by Alcan Aluminum Ltd. of Canada, a long-time corporate sponsor of professional golf on international circuits. The tournament was dreamed up by a Montreal magazine publisher named Hilles Pickens and a Montreal radio broadcaster named Doug Smith. The idea was to use four tournaments in the U.S. and four in Great Britain to qualify for a tournament at St Andrews. They sold the idea to Aluminium Ltd. of Canada, which was at the time changing its name to Alcan. Alcan thought the tournament would be a fine way to promote the new title with both the public and big buyers all over the world. Arnold Palmer and Jack Nicklaus had qualified to play in the tournament but sent their regrets, as did top U.S. money winners Dan Sikes and Julius Boros. For big-name attractions the tournament had to rely on Casper, Brewer and Doug Sanders. Casper and Brewer played fine golf at the windy St Andrews course and after three rounds they were tied with England's 22-year-old Brian Barnes, at four under par. On Sunday Barnes fell back and come the 18th hole Casper and Brewer were tied at 283. The playoff was played on the Monday over the full 18 holes.

*Gouache is a type of paint consisting of pigment suspended in water. Gouache differs from watercolor in that the particles are larger, the ratio of pigment to water is much higher, and an additional, inert, white pigment such as chalk is also present. This makes gouache heavier and more opaque, with greater reflective qualities.

St Andrews "The Home of Golf" is on the Fife Coast of eastern Scotland and is considered the oldest and most iconic golf course in the world. The Old Course is 6721 yards with a par of 72. It is famous for the 'Swilcan Bridge' spanning the first and 18th holes and 'Hell Bunker'. Everyone who plays the 18th hole walks over the 700-year-old bridge, with it featuring in many iconic pictures of St Andrews. The Old Course remains a public golf course, open to all and apart from the clubhouse for the Royal and Ancient, there are clubhouses overlooking the links for The St Andrews Golf Club (1843) and The New Golf Club St Andrews (1902) for men and the St Rule Club (1896) and St Regulus Ladies Golf Club (1913) for women.

The Old Course was pivotal to the development of golf and how the game is played today. By 1754, St Andrews consisted of twelve holes, ten of which were played twice, making a round of twenty-two holes in all. The members deciding that the first four and last four holes on the course were too short combined them into four holes (two in and two out). St Andrews then became the first 18-hole golf course in the world, and a blue print for the modern course.

In 1863 the R&A appointed 'Old' Tom Morris as Custodian of the Links and with the skills he had learnt at his time in Prestwick, he went about rejuvenating St Andrews. He established separate tee boxes on each hole, the fairways were widened, the greens enlarged and two new ones were constructed. The hazards were actively managed (before then hazards and bunkers had been left to mother nature) all of this spread out play over larger areas, thus increasing the volume of golf being played at St Andrews. Tom introduced the concept of top-dressing greens with sand, was the first to use a push mower to cut greens and all the time this was helping to improve the quality of the course. He also owned a shop and workshop at 8 The Links, which still exists.