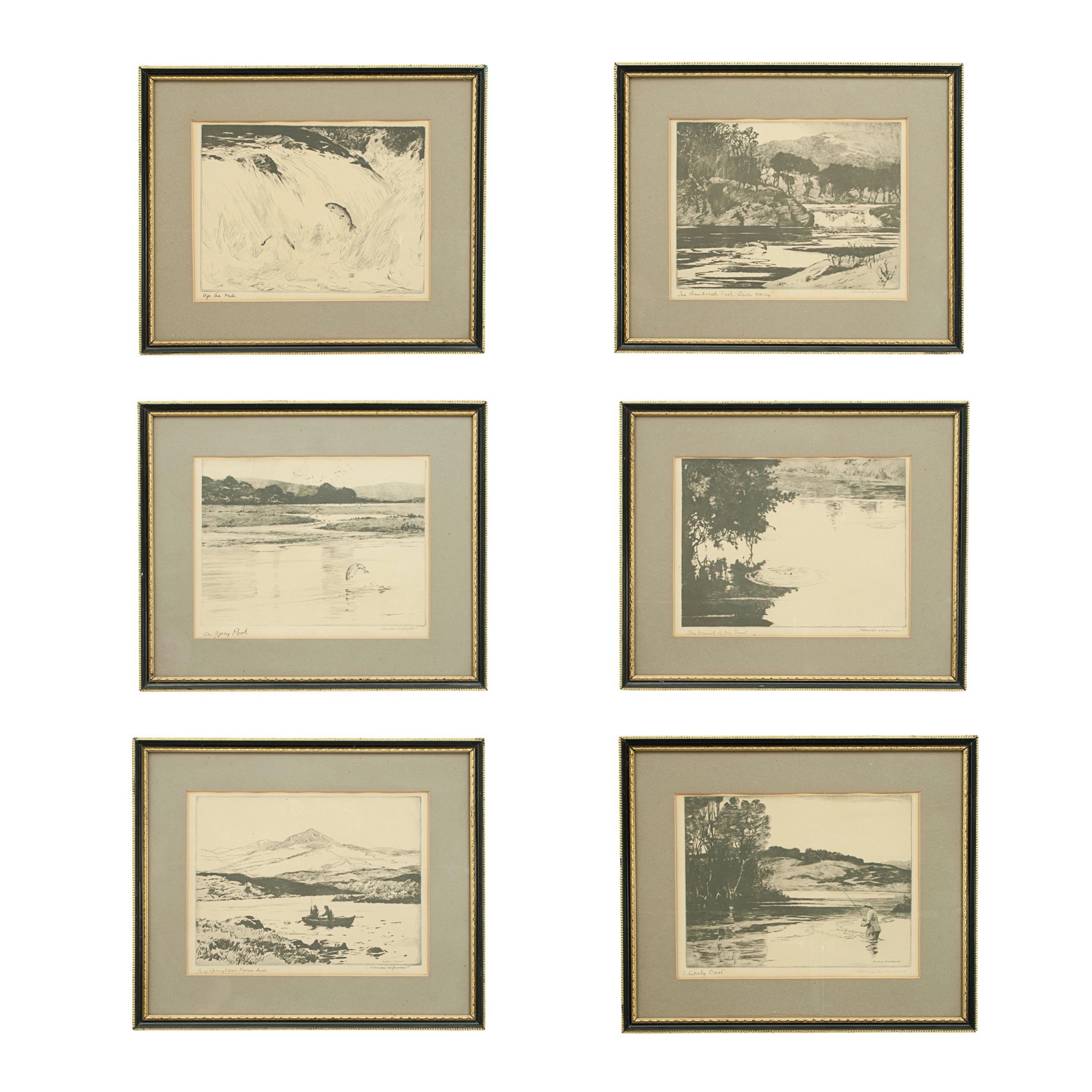 Set of 6 Fishing Pictures by Norman Wilkinson.
Six black and white fishing illustrations by Norman Wilkinson. The fishing prints are titled 01 - Up The Fall, 02 - The Bewitched Pool. River Orchy, 03 - A Likely Catch, 04 - An Anglers Paradise, 05 - The Haunt of Big Trout & 06 - a spey Pool. A great set of framed angling pictures, they look like drypoint etchings but are most probably from some form of publication.

From Wikipedia, the free encyclopaedia.
Norman Wilkinson CBE RI (24 November 1878 - 31 May 1971) was a British artist who usually worked in oils, watercolors and drypoint. He was primarily a marine painter, but he was also an illustrator, poster artist, and wartime camoufleur. Wilkinson invented "Dazzle Painting" to protect merchant shipping during World War I. He decided that, since it was all but impossible to hide a ship on the ocean, a far more productive question would be: How can a ship be made to be more difficult to aim at from a distance through a periscope? In his own words, he decided that a ship should be painted "not for low visibility, but in such a way as to break up her form and thus confuse a submarine officer as to the course on which she was heading", thus Dazzle Painting camouflage was invented.

Wilkinson was born in Cambridge, England, and attended school at Berkhamsted School in Hertfordshire and at St. Paul's Cathedral Choir School in London. His early artistic training occurred in the vicinity of Portsmouth and Cornwall, and at Southsea School of Art, where he was later a teacher as well. He also studied with seascape painter Louis Grier. At age 21, he studied academic figure painting in Paris, but by then he was already interested in maritime subject matter.
Wilkinson's career in illustration began in 1898, when his work was first accepted by the Illustrated London News, for which he then continued to work for many years, as well as for the Illustrated Mail. Throughout his life, he was a prolific poster artist, designing for the London and North Western Railway, and the London Midland and Scottish Railway. It was mostly because of his fascination with the sea that he travelled extensively to such locations as Spain, Germany, Italy, Malta, Greece, Aden, Bahamas, United States, Canada and Brazil.

Robert Jobling Oil On Canvas Of Two Girls On The Rocks

With The Beaters By Heywood Hardy

Antique Golf Pictures, The Drive Off, In a Bunker