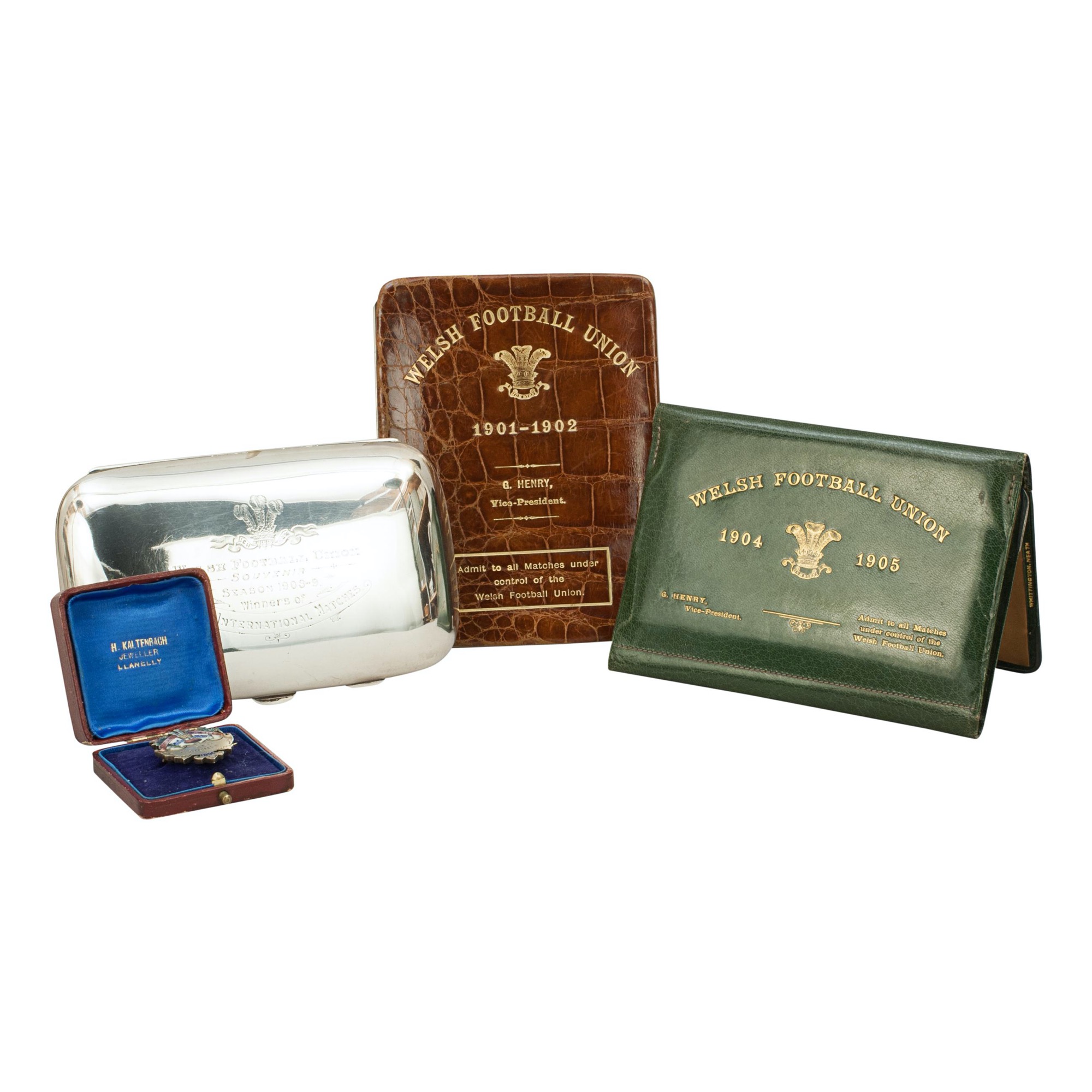 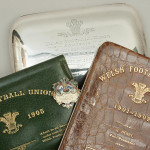 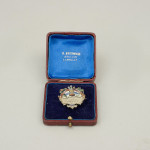 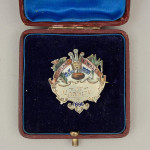 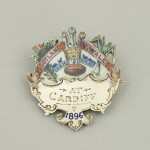 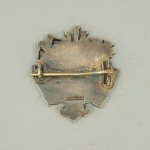 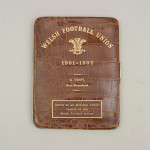 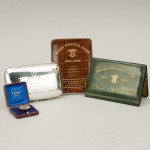 The medal is in the original H. Kaltenbach, Jeweller, Llanelly, presentation box. It is enamel on silver showing the heraldic badge of the Prince of Wales (this consists of three white ostrich feathers emerging from a gold coronet with a ribbon below bearing the motto "Ich dien"), a leather rugby ball, a leek and a thistle, Scotland V Wales and engraved at 'Cardiff, 1896'. The back with pin and stamped 'Sterling'. The badges were presented to the players of the Wales v Scotland Four nations match 25th January 1896. The match was played at Cardiff Arms Park and won by Wales by 2 tries - 6 points to nil.

The leather crocodile wallet is in excellent condition with a chrome metal surround. The front of the wallet embossed in gilt 'Welsh Football Union, the Prince of Wales's feathers, 1901 - 1902, G. Henry Vice - President, admit to all matches under control of the Welsh Football Union.

The green tri-fold leather wallet is in very good condition with silver corner mounts. The leather is a little scuffed on the folds inside. Stamped inside 'Whittington. Neath' and fitted with a propelling pencil. The silver mounts hallmarked London 1903. The front of the wallet embossed in gilt 'Welsh Football Union, the Prince of Wales's feathers, 1901 - 1902, G. Henry Vice - President, admit to all matches under control of the Welsh Football Union.

The silver cigarette case with gilt interior, hallmarked Birmingham, 1909 with initials W.N. & Crouch Cardiff. The case in excellent condition with no dents, catch works well as does the internal spring arm. Engraved to the front of the case 'the Prince of Wales's feathers, Welsh Football Union Souvenir, Season 1908 - 1909, Five International Matches.

Taken from the Welsh Mail 19/08/1904:-
Football. Meeting of the Welsh Union Committee.
A meeting of the general committee of the Welsh Rugby Union was held at the Queen's Hotel, Cardiff, on Thursday evening, Mr. Horace Lyne in the chair. The business was of aa formal character. Mr. Lyne was re-elected chairman of committee, and the following were elected on the finance committee:- Messrs W.D.Phillips, Gavin Henry, Ack Llewellyn, J.Games, W.M.Douglas, and T.D.Schofield.
Mr. Gavin Henry takes the place of Mr. W.Wilkins, who resigned his position as Vice-president of the Union at the last annual meeting.

Reported after the Scotland Wales match Arthur Gould (Wales Captain) was exclaiming to everybody after the match "Cymru am byth" and directly after he said it, he would exclaim "I don't know what it means, but I've been told to say it". There was a great deal of chuckling when Gavin Henry 'A Scotsman of the Llanelli club' came to Arthur's rescue and said it meant "Wales forever" adding that it was rather good on such an occasion as that for a Scotsman to teach a Welshman his own language.