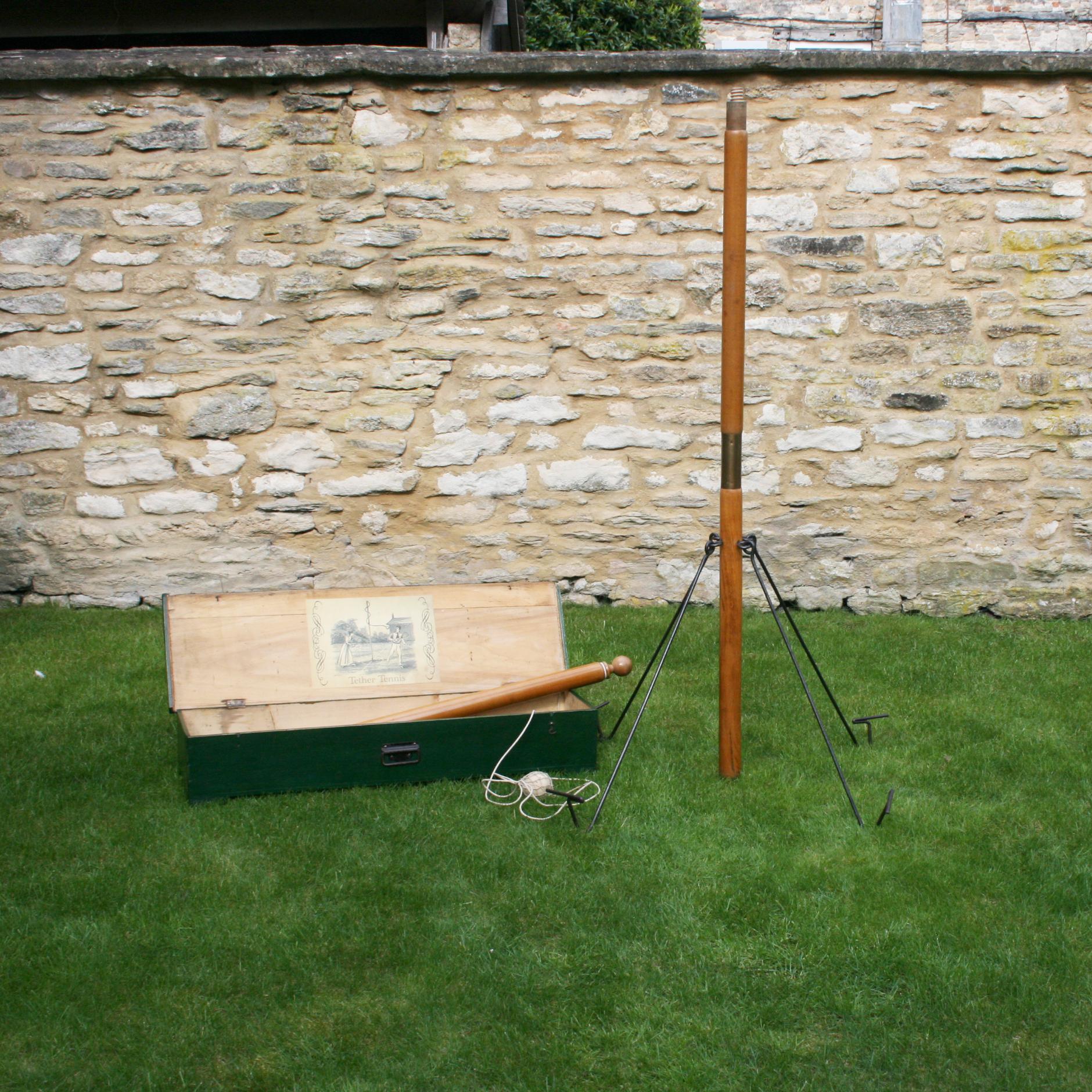 Vintage Boxed Tether Tennis Game.
A late Victorian or early Edwardian Tetherball or Swing ball tennis game. The game comprises of a large beechwood pole, metal pegs and ball in original refurbished pine box. The pole is in four sections with metal securing struts for fixing to the lawn. It is thought 'Tether Ball' was invented in England circa 1880. The maker of this set is unknown but both Wright and Ditson and Spalding made Tetherball sets, also called "tether tennis". Tetherball originated for the purpose of practising various strokes at lawn tennis and then developed into its own game. It is played with tennis rackets but instead of a net a ten-foot pole is used. Two persons standing on opposite sides of the pole endeavour to strike the ball and wind it around the pole.

Taken from Spalding's Athletic Library:-
A new game recently developed out of Lawn Tennis is Tether Ball. One of the difficulties in connection with practicing the strokes in Lawn Tennis is the obvious one of the recovering the balls that have been driven. Accordingly, it occurred to some bright individual that the ball might be tethered from an up-right post. The ball upon being struck almost inevitably tended to wind the string that held it around the pole. It was but a step beyond this to the production of a game – two individuals standing on opposite sides of the pole, each endeavoring to wind the ball around the pole in different directions. Thus, we have the popular game of Tether Ball. The step formulating the rules defining heights, distances, and the like, is the remaining one necessary. It is made in the following article.
The great advantage of the game is the limited space demanded by the sport – a piece of ground twenty feet square is sufficient. There are no balls to chase, no expensive net or back-stop to be erected, no exasperating waits looking for the ball, no close decisions for the umpire as to whether the ball was in or out; the game is rapid, interesting, inexpensive, limited in area demanded, can be played by women as well as by men. These elements account for its popularity, and warrant a belief that it will become still more popular.
Rules of Tether Tennis
THE POLE
1. The pole shall be an upright wooden pole, standing 10 feet out of the ground. It must be in a vertical position and firmly embedded in the earth so as not to vibrate. The pole shall be 7 ½ inches in circumference at the ground; it may taper towards its upper end. There shall be a black band 2 inches broad painted around the pole 6 feet above the ground.
THE COURT
2. The court may be any smooth piece of ground, either grassed or not. It must be free from all obstructions. A circle shall be drawn about the pole on the ground having a 3-foot radius. A straight line 20 feet long shall bisect the circle, dividing the court into two sections, as per diagram. Six feet from the pole at right angles to and on each side of the line of division, there shall be two plainly marked crosses. They are to be known as the service crosses.
THE BALL
3. The ball shall be a championship tennis ball, having a strong linen tight-fitting cover. It shall be fastened to a string with a ring made of linen cord. No metal shall be used on the ball. The ball shall be suspended from the top of the pole by a piece of heavy braided fish-line. The cord must allow the ball to hang 7 ½ feet; thus, when hanging at rest, it will be 2 ½ feet from the ground.
THE GAME
4. (1) The game shall be played by two opponents who shall toss rackets for court. The loser shall have service.
(2) The game shall be started by the service. This shall be done from the centre of each person's court at the point marked with a cross.
(3) The ball may be struck in any manner with the racket in the direction before agreed upon, the endeavour being to wind the string upon the pole above the black line. The ball may be hit but once. It must then go into the opponent's court. A violation of this is a foul.
(4) The winner of the toss shall determine in which direction he will endeavour to wind the ball. His opponent must then endeavour to prevent his winding the ball in that direction, and must endeavour to wind it in the opposite direction.
(5) Each player must keep wholly within his own court. This includes his arm and his racket. He must not step on or over the circle about the pole. A violation of this rule constitutes a foul.
(6) If the string winds around the handle of the racket of one of the players, this is a foul. In case the string winds about the pole below the black mark, this counts a foul on the person in whose favour the string is wound.
(7) Penalty for all fouls is a free hit by the opponent from the service cross.
(8) If in taking the ball for service, it must be either wound or unwound on the pole a half turn in order to reach the other side, it shall be unwound.
(9) The game is won when the string has been completely wound up on the pole above the black line.
(10) The person winning the majority out of eleven games wins the set.

Set Of Leather Horse Shoes For Tennis And Cricket Lawns