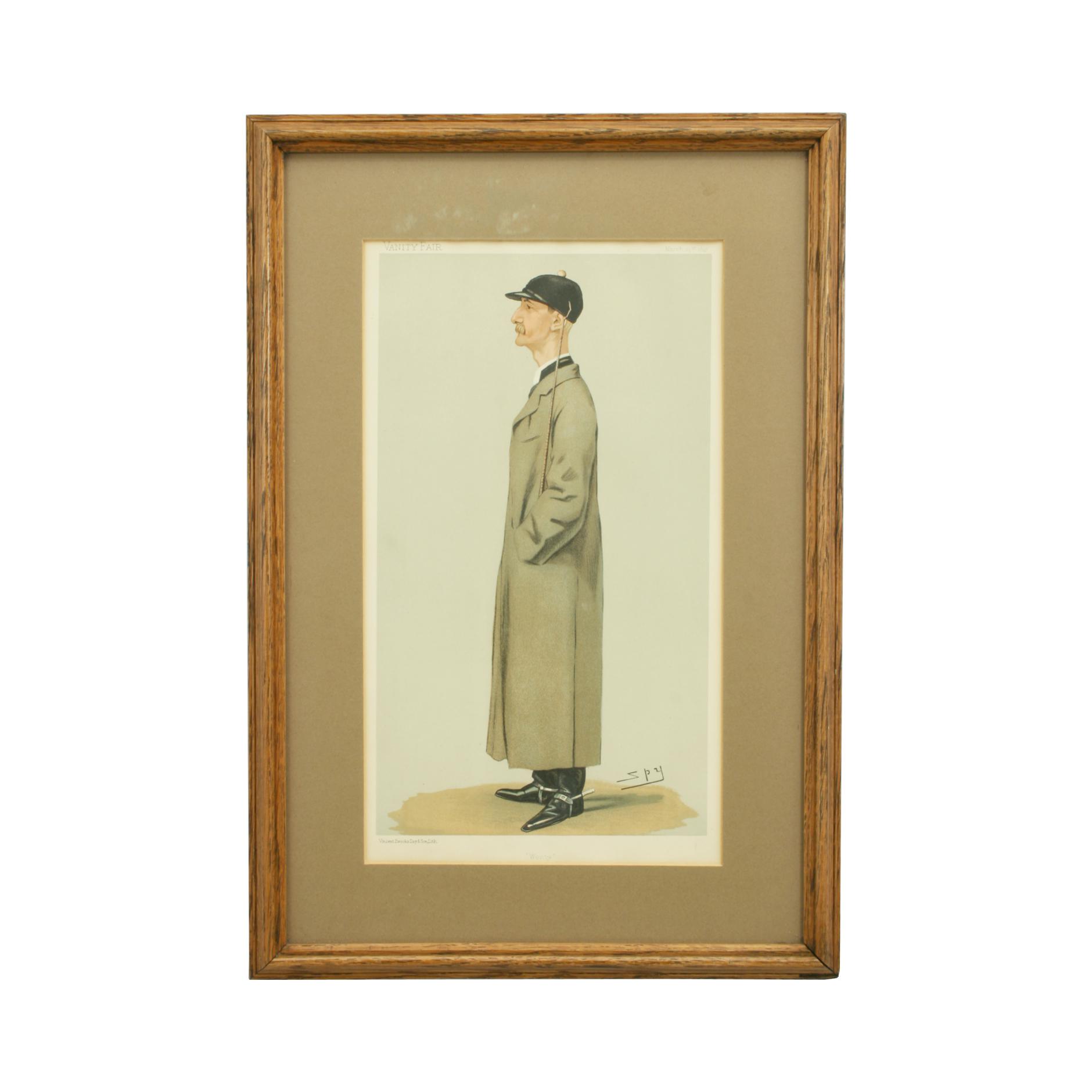 Vanity Fair Equestrian Print "Wenty".
A mounted and framed chromolithograph print published March 25th, 1897, by Vincent Brooks, Day & Son Ltd. Lith., for Vanity Fair. The picture is titled 'Wenty' and is an original print of Captain Wentworth William Hope Johnstone, after SPY. The Vanity Fair Jockey print is in good condition, mount card is marked.
Captain Wentworth William Hope-Johnstone was born on January 22, 1848.
He rode 352 winners including five in one day at both Dunfermline in 1877 and at Burgh by Sands in 1885. He was champion amateur twice: 1876 and 1877. His three Grand Military Gold Cup wins came in 1873, 1875 and 1876. The rides were Rivirescat, Lady Sneerwell and Earl Marshall.

Once retired he became a farmer and a stewarded at race meetings.

When first published in the weekly additions of Vanity Fair each caricature would come with an amusing biography, there is the original biography glued to the back of the frame for this print.

Captain Wentworth William Hope Johnstone.
A WHOLESOME Scotchman, he comes of a good old Border family that has produced many quite capable sportsmen; he is forty-nine years old; and he knows as much about a horse as any other man. Born in Dumfriesshire, he was early used to a healthy outdoor life; and he soon increased his natural love of horseflesh by joining the 7th Hussars: whence he retired a Captain, after having thrice won the Grand Military. He also won the Prince of Wales's first Steeplechase on Leonidas; he headed the list of amateur riders in 1876 with forty-five wins, and in 1877 with fifty-five out of 114 mounts; he has beaten his field once out of every three races of over eleven hundred that he has ridden during the long space of thirty-one years; he has been first past the post on every steeplechase course in the United Kingdom; and he has seen men race all over the world. Yet he still believes in waiting in front, although there is none other now riding who rode when he began.
He manages Mr. F. D. Leyland's horses, and rides them when he can do the weight. Although he is six feet long he has ridden ten stone seven; and he has been so successful that people say that he often wins out of his turn. He is a good, quiet fellow, who is full of pluck and unbroken nerve. He is altogether a popular gentleman rider; and "Wenty's" wife is very proud of his riding.
He has never had an accident riding; but he was once badly smashed in a four-wheel cab.