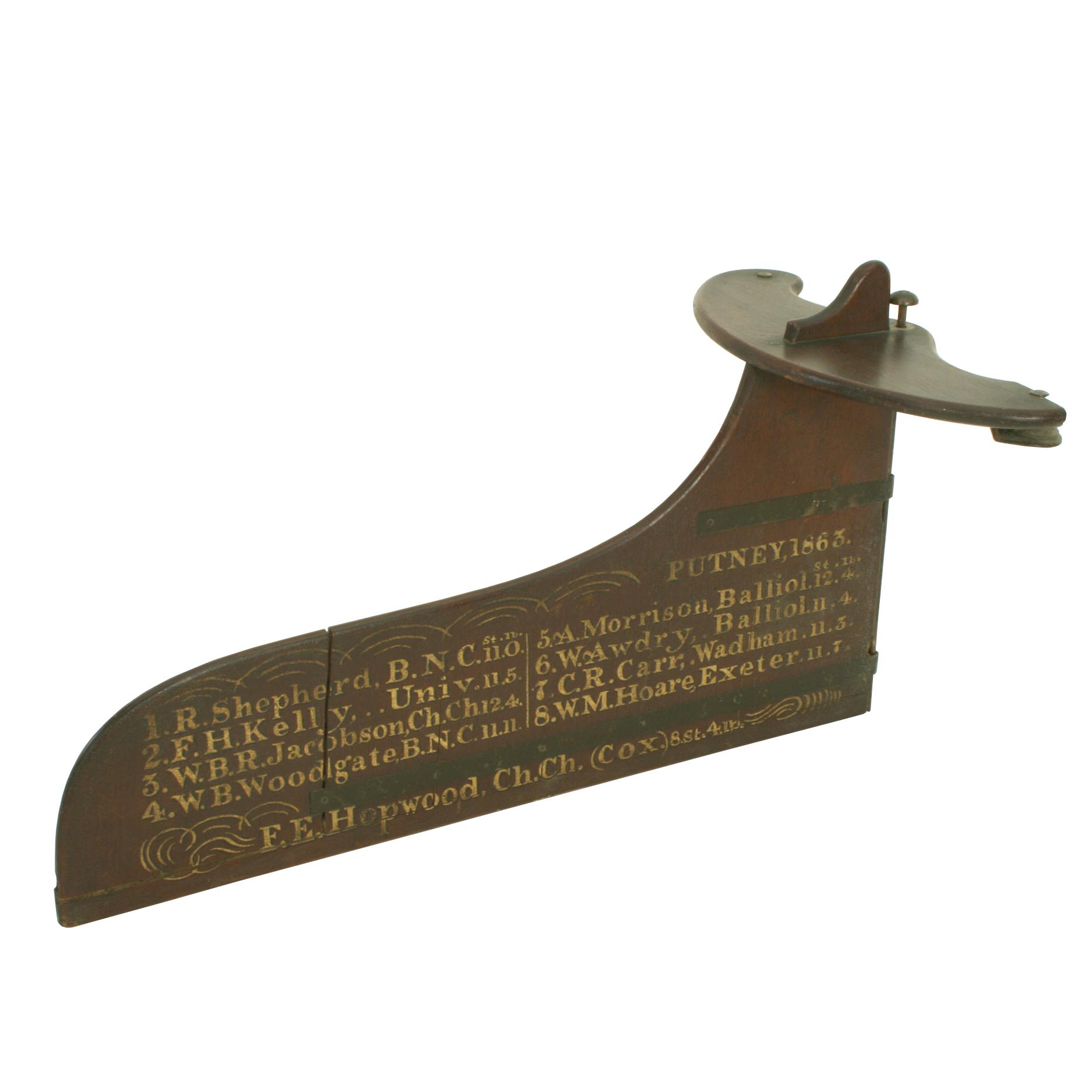 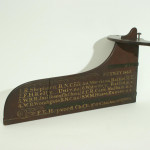 Original University Boat race Rudder 1863.
This is the most wonderful memento of the 1863 boat race between Oxford and Cambridge University. The traditional presentation trophy rudder is the former property of the Oxford cox, F.E Hopwood. The rudder is in very good condition for its age, with two splits from shrinkage which is quite normal. The calligraphy is beautiful and original with no repaint or repair. Hopwood was also on the victorious side the year before.

This was the 20th boat race between the crews from Oxford and Cambridge Universities. It took place on the River Thames on 28 March 1863.
The winners, Oxford, won by 15 lengths with a time of 23 minutes and 6 seconds. The race took place in ebb tide for the third time with the course starting from Mortlake and finishing in Putney. This race brought the overall score to 10 wins each.

The Oxford crew averaged over 6 feet (1.83 m) in height, and weighed an average of 11 st 8.5 lb (73.5 kg), 2.75 pounds (1.2 kg) per rower more than their Light Blue opposition. Six of the Oxford crew had represented their university in the previous year's race, including W. M. Hoare who was rowing at stroke for the third time. The Cambridge boat contained two members of the 1862 crew, including William Cecil Smyly and John Graham Chambers.

Oxford, who were clear pre-race favourites, won the toss and elected to start from the Middlesex station, handing the Surrey side of the river to Cambridge. Like the 1856 race, the race was conducted on the ebb tide, and the start was moved to Barker's Rails, to "give the steamers room between the Aqueduct and the crews". The start of the race was delayed for around half an hour as a result of a number of steamers impinging upon the course. The future British King, Edward VII, was in attendance. At the time of the race, there was a mild breeze and the water was "perfect, but for the steamers."

Cambridge made the better start, but Oxford's steady rowing brought them level and within 300 yards (270 m) of the start, they were nearly half-a-length up on the Light Blues. By Craven Steps, they were clear and two lengths up by the Mile Post. Oxford crossed over to row directly in front of Cambridge, and according to MacMichael, "it was evident here that the race was over, barring accidents." The Dark Blues were three lengths up as they shot Barnes Bridge and won by fifteen lengths. It was Oxford's third consecutive victory and took the overall total to ten wins each, the first time since the 1856 race that the scores were tied.