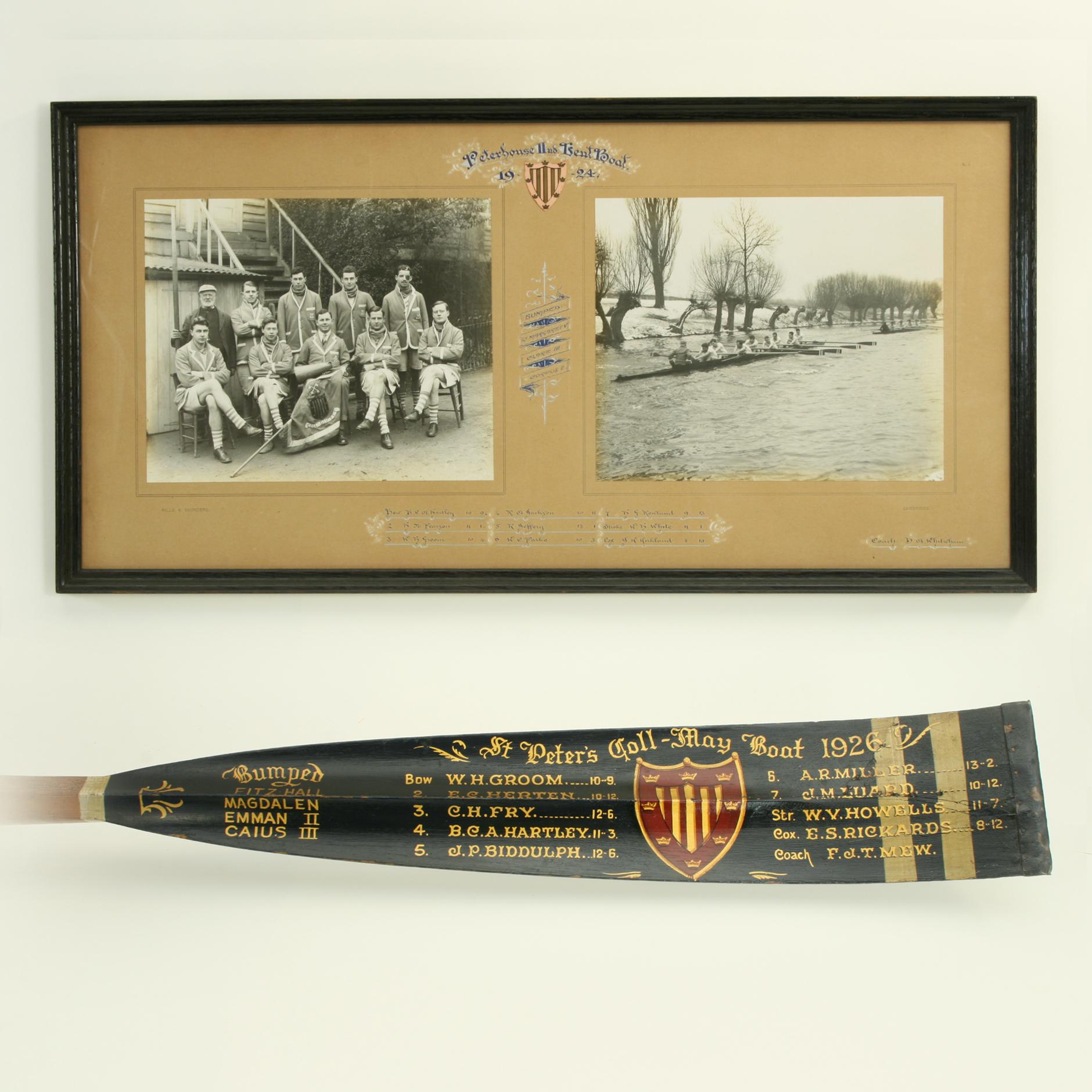 The team photo is of the Peterhouse IInd Lent Boat of 1924. The photos are framed in a traditional black oak frame with a photo of the crew in their boat on the right and the crew photo on the left. The gentleman with the eye patch is Groom and can be seen as No.3 in the scull, the order of oarsmen being, facing the cox, Stroke, 7,6,5,4,3,2, Bow. Mounted on the official photographers mount 'Hills & Saunders, Cambridge' with calligraphic legend and college crest to the center. It shows the names and weights of the crew. On the rear is the Hills & Saunders trade label and written in pencil 'W. H. Groom Esq', thus making us believe that this belonged to him.

The oar is an original traditional St. Peter's College presentation full length rowing oar with gilt calligraphy and college insignia. Although the blade has been cracked and repaired the writing on it is in good condition and reads:-

St Peter's College and Peterhouse are the same institution, the former name went out of use before the last World War. Peterhouse is the oldest of the Cambridge colleges, founded by Hugo de Balsham, Bishop of Ely in 1284 and granted its charter by King Edward I.

W. H. Groom was born in Calcutta in 1902 and was destined for an army career having first gone to Sandhurst, but unfortunately after loosing an eye in a motorcycle accident that was the end of the army for him. Like his brother before he went to Peterhouse College to read Economics, although he seems to have spent most of his time on the river. In the later 1920's and 30's he was a rubber-planter in Malaya. During WWII he was ordained and after the war appears as a vicar in East Anglia, he died in 1966. As for his fellow crew members the information below refers roughly up to the period of 1939.

Team photo:-
(BOW) B. Hartley became a schoolmaster, (2) H. Pearson left the College after Lent term 1924, (4) R. Jackson became a works manager with a printing firm in Carlisle, (5) R. Jeffery became a schoolmaster, (6) W. Parke left after Easter Term of 1924 and became a banker in Hamburg, London, New York and Chicago, (7) H. Rowland left after Lent Term in 1924 and was called to the Bar in 1928, (stroke) W. White left after Eater term in 1924 and was known at one time to be writing plays in Spain, (Cox) J. Kirkland became Managing Director of J.W. Kirkland & son (Pty) Ltd (engineers and importers), Johannesburg, and (coach) D. Whitwham took Anglican orders in a Diocese of London.

Rowing blade:-
(2) E. Herten became a London surgeon, (3) C. Fry became an architect, (5) J. Biddulph went out to the Malayan Civil Service, (6) A. Miller died from meningitis while a student at Peterhouse,(7) J. M. Luard went out to Anglo-Persian Oil in Teheran in the late 1920's,(Str) W. Howells became a surgeon, initially in Swansea, (Cox) E. Rickards became a solicitor in the West Country and (Coach) F. Mew was not a Peterhouse man but was from Jesus College.

We would like to thank Dr. Philip Pattenden from Peterhouse for his time spent researching the names on these two items.